The butterfly is a symbol of  change, growth and transformation and it appears in several countries stories and myths.  The butterflies short life seems to encompass what our journey on earth will entail as nothing is ever static. We will experience  heartache, disappointments, betrayal, failures, loss, isolation, things that can put us in a cocoon situation, but this little creature teaches us about change, growth and transformation. One such tale I love is the story of Butterfly Woman who is a Hopi Native American Springtime goddess who helps you to come out of any cocoon situation you are in, giving you the strength to spread your wings and fly. She inspired healing, workshops and jewelry and represents the emerging and metamorphosis that happens when you experience some kind of upset or trauma and the possibility of being in the present, looking at another cultures understanding of a myth as told to generations at a different time and place and seeing how it can provide you with a sense of comfort. Hope some of the stories below can help to sooth what ever it is you are going through presently. 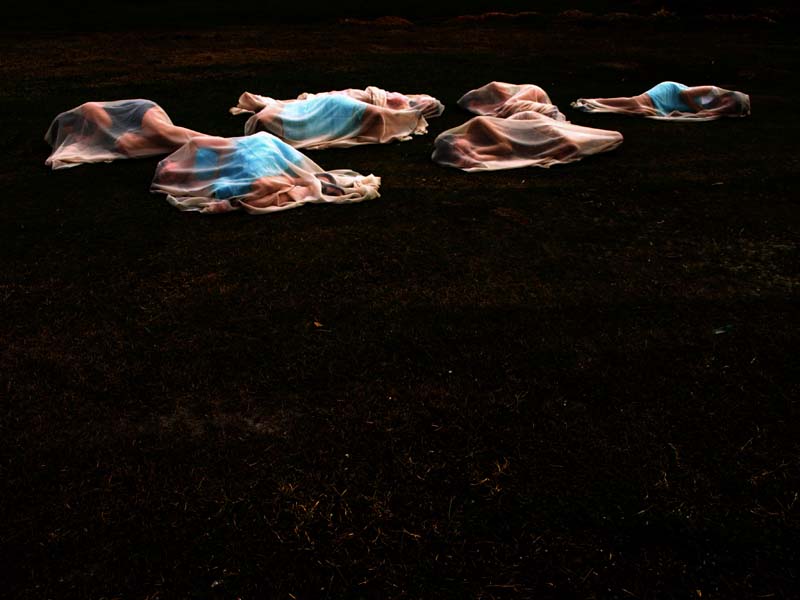 Stories, Myths and Ancient Folklore about Butterflies ~
Many of the ancient civilizations believed that butterflies were symbols of the human soul.
The Greeks believed that a new human soul was born each time an adult butterfly emerged from its cocoon.
Aristotle gave the butterfly the name psyche, the Greek word for soul.

Butterflies have been used by the Chinese and Japanese cultures for centuries as symbols of joy and the essence of happiness.
Both cultures have added them to manuscripts, paintings and drawings for centuries.
Early Europeans believed that the human soul took the form of a butterfly so, they viewed the butterfly with great respect and often with fear.
Northern Europeans thought that dreams were the result of the soul-butterfly's wanderings through other worlds.
In southern Germany, some say the dead are reborn as children who fly about as butterflies, resulting in the belief that they bring children.

The Irish believe that butterflies are the very soul of a human being. And they believe white butterflies hold the souls of departed children.
A small town in Mexico also sees the butterflies as souls, and it is that town that the monarch butterflies migrate every year on and around the holiday of the Day of the Dead.  They are seen as the returned souls of the deceased.
In Roman culture they were placed on coins as a symbol of the soul.
Native American Indian legends told that butterflies would carry the wishes to the Great Spirit in heaven to be granted.
Shoshone Indians believed that butterflies were originally pebbles, into which the Great Spirit blew the precious breath of life.
Native American Zuni tribes believed that butterflies could predict the weather. The Zuni also believed that the white butterfly predicts the beginning of summer.
The Blackfeet Indians believe that dreams are brought to us in sleep by a  butterfly.
The butterfly is a symbol of the fertility of the earth among some tribes of Mexico.
Born out of the caterpillar in the chrysalis, butterflies were a symbol of rebirth, regeneration, happiness, and joy to Native Americans in Mexico.
The Maya looked upon butterflies also as the spirits of dead warriors in disguise descending to earth.
A dying man in the Solomon Islands has a choice as to what he will become at death and often chooses a butterfly.
Among the Nagas of Assam the dead are believed to go through a series of transformations in the underworld and are finally reborn as butterflies.
When the butterfly dies, that is the end of the soul forever.
The Aztecs believed that the happy died in the form of beautiful butterflies and would visit their relatives to assure them that all was well.
These butterflies flew around the house and around bouquets of flowers which were carried by Aztec men of social rank. 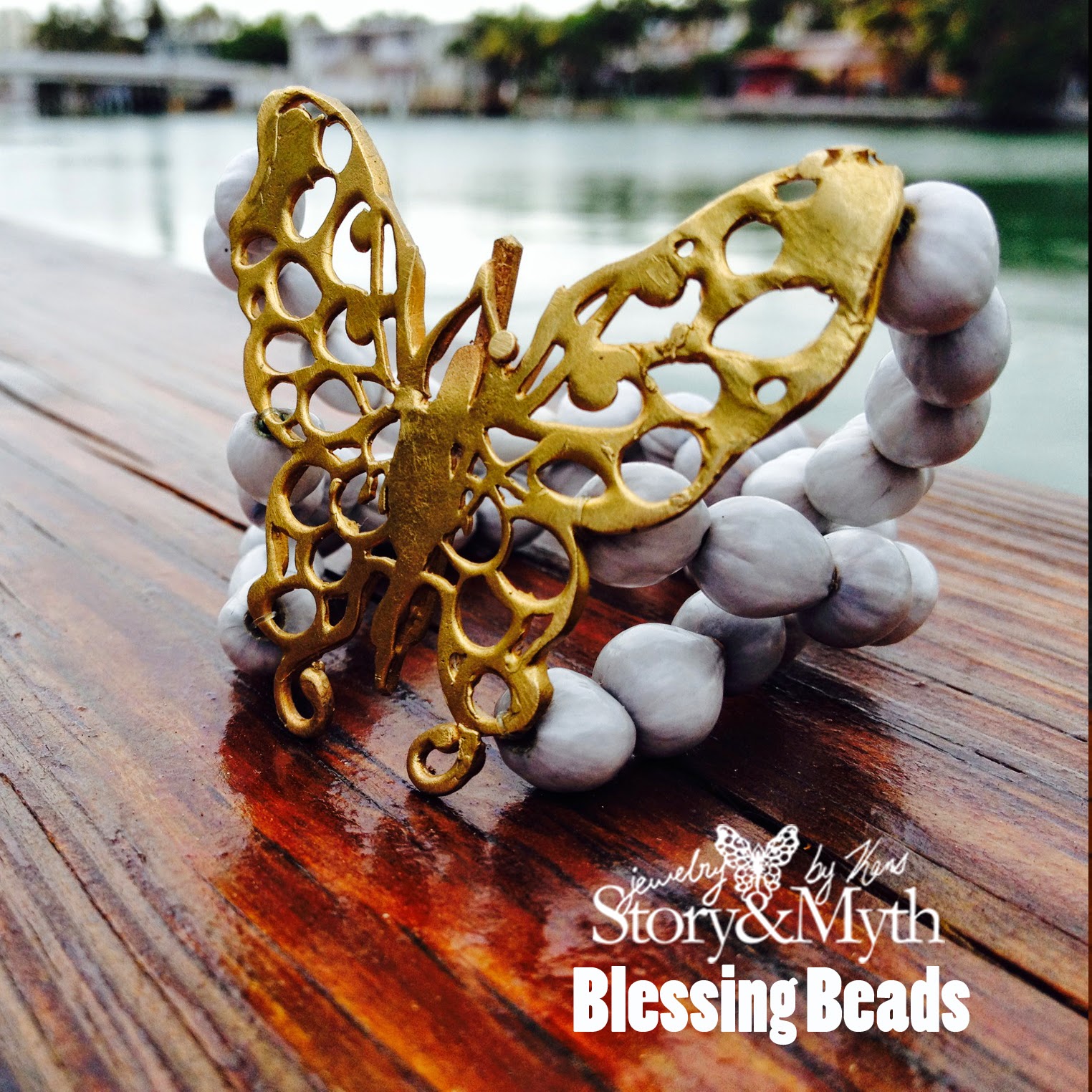 http://www.facebook.com/storyandmyth
Posted by Kristie Stephenson at 11:49 AM No comments: 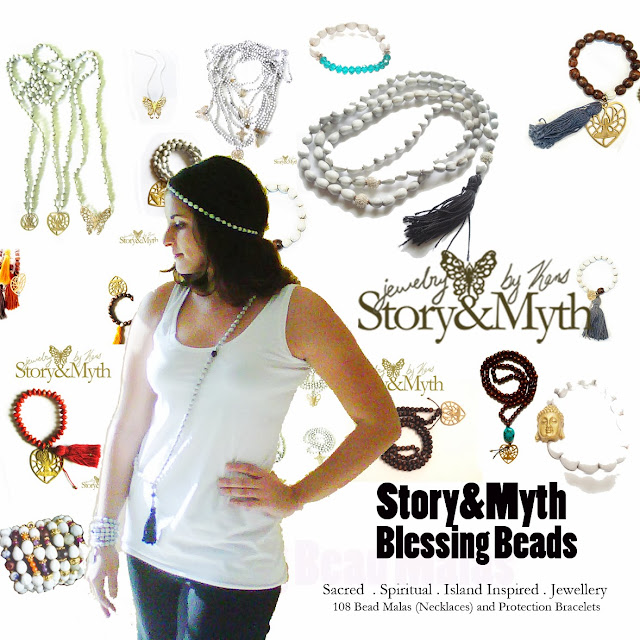 Model Lauren Mackay wearing stacks of blessing bead protection bracelets and semi precious gemstones and a 108 Blessing Bead mala/ necklace with insert gemstones and a handmade tassel.  The tassel represents the 1,000 petal lotus a symbol of enlightenment.  Clothing by Mijan Interlocks.  All available at Lee's Fifth Avenue in Manor Park and My Jamaica in Liguanea Plaza.

Below are some images from the Mijan Interlocks fashion show of models wearing our blessing bead malas/ necklaces and protection bracelets.

Posted by Kristie Stephenson at 4:02 PM No comments: 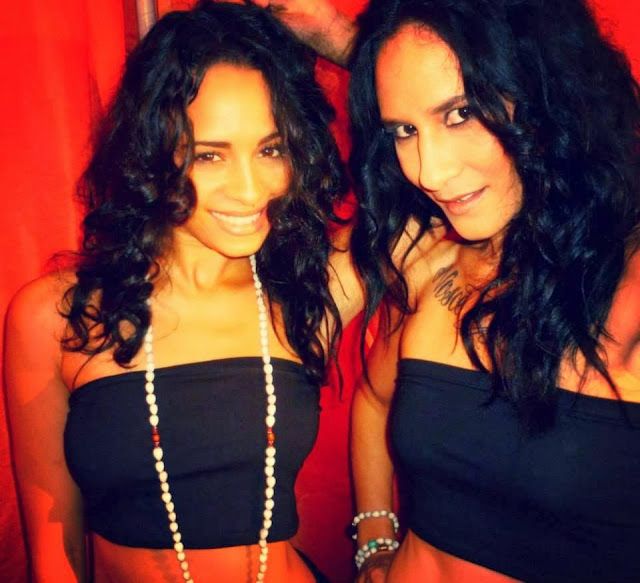 http://www.facebook.com/storyandmyth
Backstage at the Mijan Interlocks Fashion show where our jewelry accessorized the collection.  It was a spiritual themed fashion show with chanting, drumming and world beat music.  Models Gabrielle Davis and Maylynne Lowe wearing our Blessing Bead Protection bracelets with  gemstones and 108 blessing bead mala/ necklace with gemstone inserts.
Posted by Kristie Stephenson at 7:13 AM No comments:

If you see something on our facebook page send us a message and we can place it in our etsy shop for you to buy. Items take 3 to 4 days and ship anywhere in the US from Jamaica, you can also track your items online. Contact us for the discount code before checkout.
Posted by Kristie Stephenson at 4:46 AM No comments: 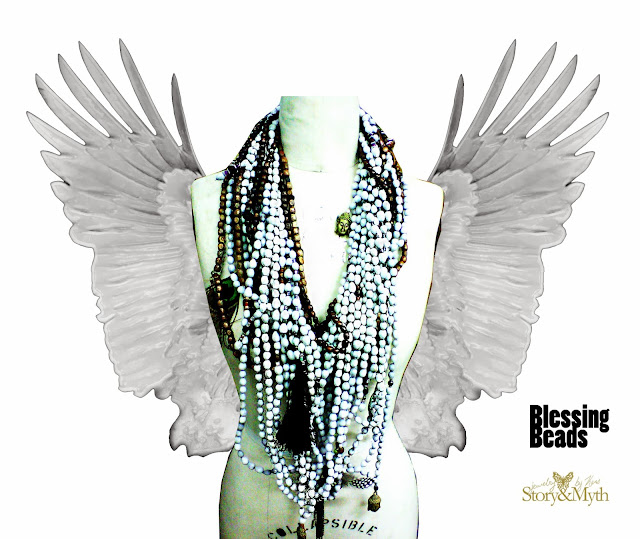 For there to be awareness one needs to experience darkness.  True light workers have walked the path and know the way towards the light.  They are awake, alert, innate, primal senses realized.
This styling is  more dark in comparison to sunny island sea and sand imagery.  It represents an awake and grounded  individual an empowered human being, a warrior, a goddess.  Someone who has confronted the shadow and sees it for what it is.
Story and Myth Blessing Beads, sacred, spiritual, sourced from secret island finds.  Protection bracelets and malas (assorted prayer bead necklaces shown).

Posted by Kristie Stephenson at 6:31 AM No comments: 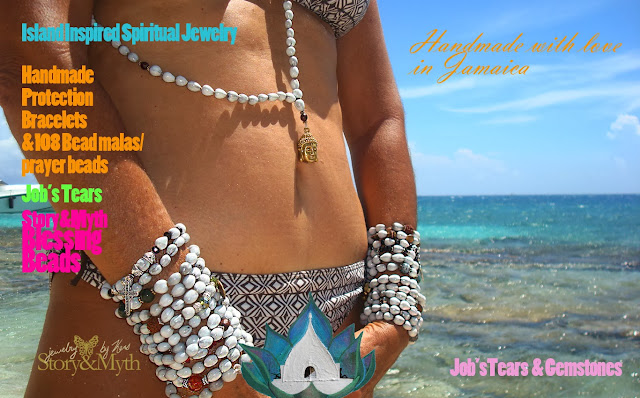 Island inspired handmade protection bracelets and 108 bead malas/ prayer bead necklaces.  Mixing indigenous Job's tears seeds with semi precious gemstones.  The Job's tears seeds comes from an ornamental grass in Jamaica.The seeds are harvested by a local farmer and the jewelry is assembled by a small community of artisans.  Each peace is made with intention and love and provides blessing and protection to the wearer.
Posted by Kristie Stephenson at 4:29 AM No comments: